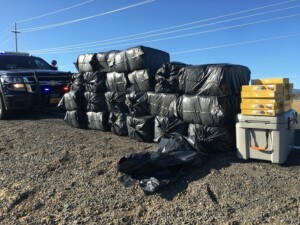 On October 23rd at about 3:00pm, an Oregon State Police (OSP) trooper stopped a 2015 Chevy Pickup on Hwy 140E near milepost 15 for a traffic violation.  During the traffic stop the trooper obtained probable cause to search the vehicle.  During the search the trooper located 632.5 lbs of marijuana and 36.8 lbs of suspected BHO (Butane Honey Oil) extract.

The OSP Domestic Highway Enforcement (DHE) team routinely conducts illegal narcotic trafficking saturations throughout the state of Oregon.  Their mission is to identify and disrupt all criminal conduct on Oregon highways and identify elements of drug trafficking organizations for further investigation and dismantling in cooperation with numerous law enforcement agencies not only in Oregon but several other locations within the United States.